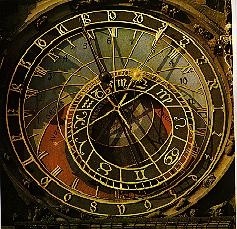 In the biblical schema of time, the six days of creation correspond to the six millennia of human history, beginning with the creation of Adam in year 0.

Each millennium corresponds to one of the archetypal creation days, beginning at sunset (as evening preceded morning in the creation story), moving through midnight, to dawn at the midpoint of the millenium, through noon, and again sunset, heralding the birth of the next day.

The seventh day or seventh millennium signifies the Sabbath day or messianic era, the return of the Golden Age as prophesized by many cultures.

In the Jewish tradition, the Sabbath is the purpose of the entire week, and preparations begin as early as Wednesday, with some traditions directing followers to think and plan for the Sabbath as early as Sunday! (For example, to set up plans with friends or family for the Sabbath meal so as to honor the Sabbath day early in and throughout the week). Already on Thursday in many Jewish urban centers throughout history and to this day, the marketplace is full of people shopping for the Sabbath, as much of the cooking for the twenty-four-hour weekly holiday occurs on Thursday night. In this way each week is a microcosm for the cosmic story which we are playing out – six thousand years of work and preparation, for the seventh year of rest and purpose in which the world is reunited with its source and in which creation is complete. Each week thus served a dual purpose until the messianic era: it was both a microcosm of the cosmic story, encapsulating the weeklong yearning for the day of rest, and it was also “one week closer” to the final redemption, when the metaphor of the weekly cycle would be actualized within space and time in an ongoing era of Sabbath rest.

In this way we can view the six millennia of human history as characterized in the biblical timeline as steps of revelation of knowledge and technology for a purpose which is now closer than ever to unfolding. Each historical event can be mapped onto the twenty-four-hour period of one of the six days of creation, and significant dates and hours can be correlated. Each millennia carries a different character corresponding to the sefirot or divine energies on the tree of life. We are presently in the sixth millennia (5000-6000), represented by Yesod on the tree of life. The fixing of our generation is around the theme of sexuality and connection, and can be rectified by connecting to one’s higher nature as embodied in one’s inner wisdom or in an enlightened being or set of teachings.

In 1990, the world reached “noon” on the cosmic clock of the sixth day of creation. This meant six hours, or 250 years were left until the final redemption. Or were they? As mentioned previously, serious preparations for the Sabbath day begin mid-week, and for certain individuals, the entire week can be infused with anticipation of and thereby vicarious experience of the day of rest in the midst of exile, changing it into a game where the goal keeps on peeking through throughout the process, adding delight in what is otherwise an arduous process of waiting for the much delayed purpose of all of existence to manifest before us, with no delay or doubt whatsoever.

Moreover, if we examine traditions around the sixth day of the week as it cycles around on a weekly basis, we see that the sixth day is more of an addendum to the seventh day than a day on its own. Friday is also called “Sabbath Eve” (Erev Shabbat), a twenty-four-hour period that commences on Thursday night. At sunset on Thursday, one still feels the “shmutz” of the week, but there is a hidden joy lurking as nightfall approaches, knowing that only a short day stands between now and Sabbath. Dawn brings greater anticipation as only a handful of daylight hours remain between the hustle and bustle and the peace and quiet.

Noon is a critical juncture, not only psychologically, but legalistically as well. According to some authorities, no work may be done after half past noon on Friday, signifying that in some way, Sabbath has already begun! Thus the hours between noon (1990 on the cosmic clock) and sunset are a highly liminal space between the previous era and the coming era, so much so that their nature is closer to the coming era than the previous. Moreover, the role that they play in preparation for the coming era is ambiguous; no longer are we working to prepare the field for the era of perfection, but rather our anticipation of this era is best served by acting as if we are already in it. For this reason the Lubavitcher rebbe would wear a Sabbath garment all through the days of the week from the year 1990 and on.

There are two other dates worth mentioning in light of our present condition. The first is the eve of the first day of Av or July 11, 2010, which marked “half past noon” on the cosmic clock, an important milestone in the afternoon defining when afternoon prayers may begin and when shopkeepers can be penalized for keeping their shops open on Fridays, according to some authorities. For many this was a summer of awakening, as the world energies were catapulted into a new phase of adaptation towards the great revelation of secrets of the world that is coming.

The other is Rosh Hashana of the Jewish year 5775, or Sep 25-26, 2014. This day will represent 12:36 on the cosmic clock and could speed things up in a big way. Thirty-six is a number laden with symbolism in the Jewish tradition. It signifies the hidden thirty-six righteous individuals who sustain the existence of the world through their supreme righteousness. The word “eleh” אלה in Hebrew is numerically equivalent to 36. Eleh means “these” and is associated with the revelation and presentation of that which has been concealed in mystery or shielded from view. Furthermore every thirty-six minutes on the cosmic clock correspond to a quarter decade of history, and thus this time will mark one-tenth of our way from noon to the onset of the Sabbath.

In this light it is interesting to take a look at some astronomical alignments that will be occurring between now and the onset of the new year 5775 in the fall of 2015. Our study of the movements of the heavenly bodies is based on the passage from Shmot Rabbah: “Since this world found favor in the eyes of the Holy Blessed One, he established for it new moons to mark the firsts of months; and when Jacob and his children found favor in His eyes he established for it new epochs of redemption.” Thus just as the sun and moon govern the cycles of time as we experience through the months and seasons, so the orchestra of heaven governs the cycles of progress and amplification towards the redemption. As with all dates and speculation activities, we are not looking for an “end-date” but rather a way of living the future in the present, and of living the present in alignment with the purpose which can be illuminated through gazing upwards, as it says in Isaiah, “Lift your eyes and see, who created these (“eleh”)?” We are in the liminal period in which we are both living in time, and living in the future era as it is reverberating through the present.

On June 19th, Jupiter and the sun will be conjunct shortly before sunset before the 12th of Tammuz in Jerusalem. This is undoubtedly a good omen for the annual chasidic holiday of redemption on the 12th and 13th of Tammuz, (June 20-21) which transforms the dark energies of the month laden with Babylonian myth and symbolism of the underworld, into nogah, or darkness that itself illuminates by the revelation of the light prior to the creation, which has not been previously revealed other than in the hearts of the truly righteous. A conjunction of Jupiter and the sun is also an eclipse of Jupiter, which indicates something being withheld. Jupiter is the planet of expansion and thus we see a temporary contraction. A contraction is for the sake of revelation, which will play out in Jupiter’s transit through Cancer later this year. The immersion of Jupiter, the planet of faith, in the waters of the mikvah, the Mother and Chesed, outpouring, is thus preceded by a withdrawal for the sake of revelation.

In the days of ancient Egypt the pyramids were all aligned so that certain portals within the walls of those structures channeled the light of Sirius straight into the king’s chamber on the date of the Sirian heliacal rising. In Egypt in those days that marked the summer solstice–the point of 0 degrees of Cancer in the zodiac. (Marvin Atley, ‘The Festival of Sirius’)

Next, the closest and largest full moon of 2013 comes on June 23. The full moon is an auspicious time and the process of the moon becoming full is parallel to the process of that which is hidden coming to light. On this day, the sun, earth, moon, and Jupiter will be in alignment with the galactic plane.

June 25th is the 17th of Tammuz, which on an inner level is the beginning of a new cycle. In the past this cycle has been characterized as one of destruction, but in the future it will be one of the messiah coming to light.

The 17th of Tammuz is the beginning of a three-week period of mourning, which transforms into celebration in the era which is approaching. The line between darkness and the light of Mashaich within the darkness is growing ever dimmer. The three-week period concludes on the 9th of Av, which has been a day of tribulation in Jewish history. However, it is also a tradition that on this day a revelation of the Messiah is born (out of the ashes, so to speak). Again there are multiple levels of perception operating simultaneously in the liminal period between noon and sunset. Choose your own adventure?

The 9th of Av occurs on July 16th. This is a delicate time for the Middle East region.

July 22nd is the 15th of Av, a holiday of reconciliation between humanity and G-d offering hope for the coming of a full consolation and repair.

On July 29th (22 Av) there will be a six-pointed star or Magen David (shield of David), which in ancient times was associated with the coronation or anointing of a king.

August 7th marks the 1st of Elul, an annual month of preparation for the high holidays. The first day of the year 5774 will occur on September 5. 2013.